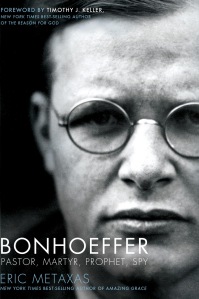 As I read Eric Metaxas’ biography of Dietrich Bonhoeffer during an intense two-week period of travel, I slowly came to feel like I knew the man. It was almost as if he was travelling with me, sharing his stories, describing his adventures. That was until the last page was turned and I finished his story. The power of that journey is still with me and as I reflect on my few days with Dietrich Bonhoeffer a number of important lessons spring to mind:

Bonhoeffer was passionate about figuring out what it meant to be a disciple of Christ in one of the darkest times in world history. However, he was not only committed to academic excellence, but also devotional living. He was prepared to model, and die for, what he believed. This is his challenge to me – to model what I believe God is saying to me in these days. I feel like I have much to learn in each of the areas highlighted – but I am seeking to understand how this works itself out in today’s church and society.

Through it all Bonhoeffer stands as a man who overcame adversity, temptation, doubt and fear. Even the Gestapo could not defeat him, they could only remove him. The same picture played out in the church; God was using the persecution to refine his church. Ruth von Kleist-Retzow commented to Dietrich “We live in strange times, but we should be eternally thankful that poor, oppressed Christianity is acquiring greater vitality than I have ever known in the course of my seventy years. What testimony to its real existence!” (page 295). God was winning. Even though his people were losing everything they had, they were overcoming their enemies. We too live in strange times; oh that God would renew and revive his church in this day to demonstrate its true vitality to a sceptical world.

One thought on “Sometimes winning means you lose everything (part 2)”