Moments after entering a darkened room you are disoriented and lose your bearings, particularly if it is an unfamiliar place. Slowly, your eyes become accustomed to the shadows and you begin to pick out the shades of grey. Eventually your eyes can see the frame of the room and you can walk around without falling over. This process is called adaptation and has been something of my experience in encountering Augustine’s City of God. It is a foreign world, an alien land. All of Augustine’s arguments in Book 2 make sense, logically. But there is a disconnect between his world and mine that jars and stops me in my tracks, waiting for my mind to become accustomed to his train of thought. In fact, as my theological eyes have become accustomed to the surroundings I see three disconnects in particular that separate our worlds:

Each of these presuppositions has been destroyed during the last two millenia. The idea of absolute or ultimate truth has died, to be replaced by Travis’ anthem “there is no wrong, there is no right, the circle only has one side”. Thus, in the UK today there is no shared concept in public life of a virtuous or moral life.  It has been replaced by the utilitarian principle – whatever makes the most people happy most of the time. And so yesterday David Cameron appealed against the scandal of our booze culture that is epidemic in the UK. But what does he give as the motivation for us to change our behaviour? Is it because this is a shameful way to treat our own bodies? Is it because it opens us up to degrading acts against ourselves and other people? No, it’s because it’s costing the NHS too much money!! How ridiculous. There is no appeal to what is right or wrong, just what a vague sense of duty, which ultimately comes from what is helpful or harmful to others. He says in effect “all this drunkenness is wasting lots of taxpayers money on the NHS that could be used for treatment – please grow up and realise how irresponsible this is.” 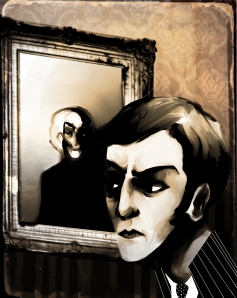 So I am left to wonder how this parallel universe was created. When was the moment when Augustine’s world and ours detached? Or perhaps it is more like The Picture of Dorian Gray, where each small act of defiance left an indelible mark that over time created a beast.

The sad thing is that this type of change is ultimately futile for it tries to motivate change for the sake of other people. For real change to happen a person must seek to be virtuous for its own sake – because it is the right thing to do, not because it has a positive impact on other people. Although this sounds selfish (to be more concerned with our own behaviour), it is paradoxically self-effacing. No longer is everyone out to claim their rights, as happens in a utilitarian society where each voice is equally right or wrong and only the loudest voice get their views accepted. Instead, a powerful new centre of morality and virtue emanates from within an individual, independent of whether society at large requires such behaviour of them. Thus, individuals are able to rise above their surroundings and the moral milieu of their day to live as they themselves demand, not because of external laws or peer pressure.

This is what Augustine was arguing for in Book 2. That there is a source of all good in the world and truth and morality are objective realities. As a result he argues that those forces which lift us above our savage lusts and restrain our appetites are reflected beams from the source of all goodness. That those things which raise our character to new heights should be recognised as indicators of ultimate truth. These are his presuppositions that he doesn’t seek to defend – rather he argues from this standpoint that the disgusting religious rites of the pagan gods reflect the demonic nature of their origin. How can they be true when they require such behaviour from their followers and make men more depraved, not less? He sees Christianity as providing a moral standard to aspire to, lifting us above what we are by nature. While we may say there are alternative moral teachings from Buddha and Mohammed these days, the questions remain “Why should we be good? Where does morality come from? Can what is created be more virtuous that the creator? Where do honour, respect and virtue come from?”

Although not directly addressing it, in his assumptions Augustine demonstrates his belief in the relationship between truth, goodness and morality. The source of all truth is also the most moral being in the universe. The highest truth should lead to the highest good. Virtue and Enlightenment together – truth is the ultimate virtue. We are far too inclined to see truth as an abstract 2-D binary quality that is independent of any moral component e.g. “Is it true that you were there that night?” Whereas Augustine wants us to consider truth in three dimensions, with a moral quality. Jesus himself does this in John 8.32 – “You will know the truth and the truth will set you free.” Truth brings the freedom to live as we were made to live. To live a life pleasing to God. This dynamic was ultimately revealed in the one who is “the way, the truth and the life” – beautifully uniting the source of truth and the pattern for living in one person. For the Christian this means that the more we get to know the source of truth, the more our lives will reflect this pattern. There is no debate, if our lives don’t reflect this pattern then we don’t know the truth (1 John 2.9).